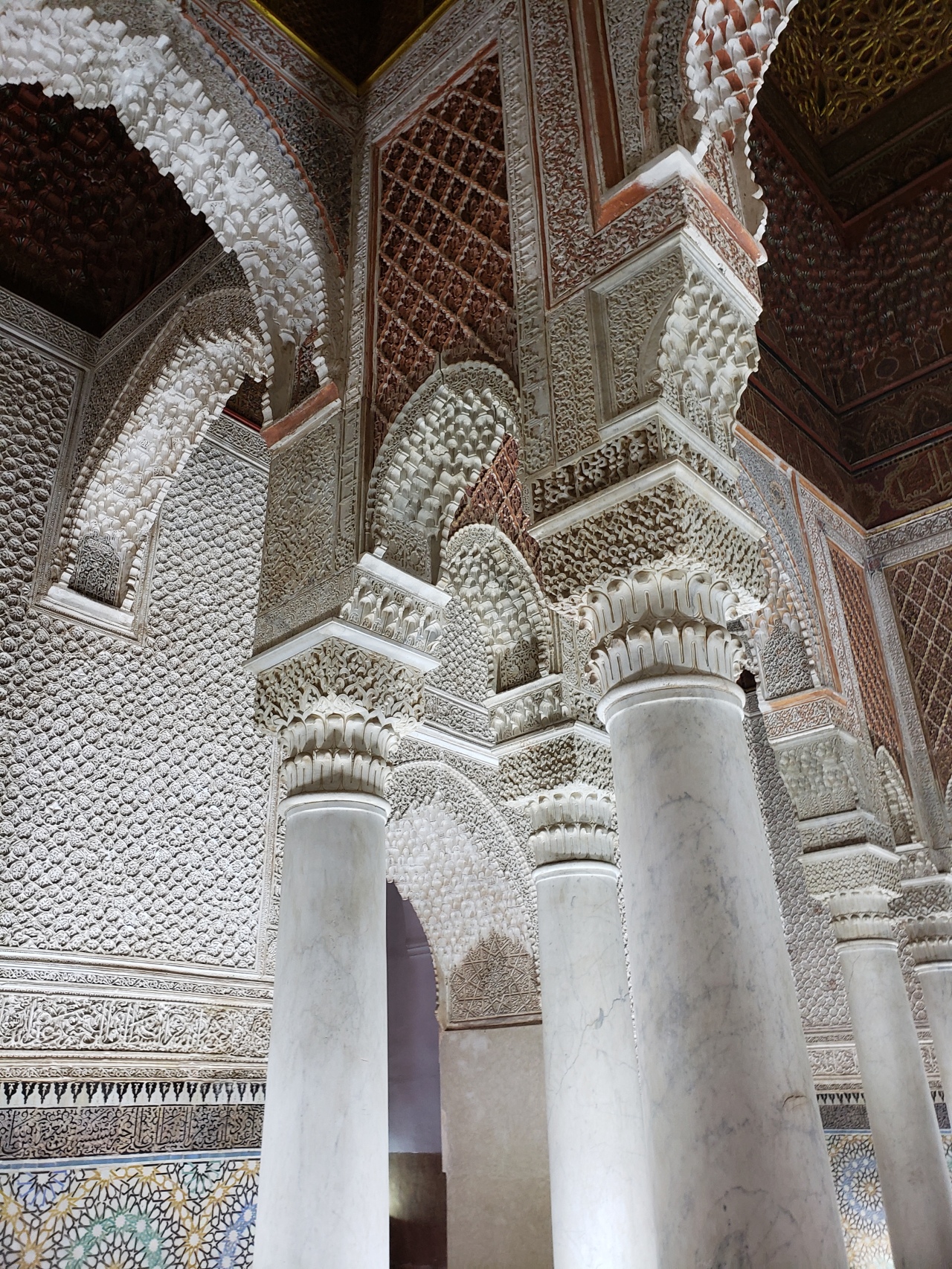 “Is this our home for a few days?” she asks while looking at me with exhausted eyes.

“Yes, sweetheart,” I reply as I dump clothes full of desert sand in a large copper bathtub, readying for my back for the strain of doing laundry over a rim set three feet high.

“Do they have a playground?”

“No,” I stop what I am doing and look at my daughter. Her eyes are tired and lost, eyes that have stared at knees while overwhelmed by sights, sounds, and cultural differences.

I pick her up, holding her tight against me. “You know what comes next?” I whisper into her ear.

She shakes her head.

“We stay here for three nights, then we go back to the room that had the really big bathtub that you played in, and then we take a plane,” I pull my head back to look into her eyes.

“You mean we are going home?” a small smile pulls at the corners of her mouth.

“Yes, after this city. Now, do you want to help me do laundry?” I ask her.

“Yes!” she squeals, kicking to be released from my arms.

I am not ready to leave this country or end the experience, but my daughter has said goodbye to two things in two days that she has enjoyed. She is ready for her routine. Playing washer woman with mom is a good second place situation now that she knows what to expect.

Today was the assigned day with our guide in Marrakech. We started with what has become a typical breakfast spread, complete with coffee, bread and pastries, and an egg if we want one.

For the first time the entire trip, my mom ate a full meal. She seemed ready to take on the heat of the day, though neither of us were really prepared for standing in queue after queue in the desert sun. Our travel companion chose to stay behind at the riad, as long as I could guarantee we would get into the markets.

I am ready to take on the souks and wander freely, so that guarantee was easily given.

Marrakech has similarities to Los Angeles, in that the city itself was chosen for location but had a complete lack of water. The solution for Marrakech is underground aqueducts running water from the High Atlas Mountains.

Named the Pearl of Morocco, Marrakech has code regulations regarding appearance and height of buildings. All buildings must be painted pink, and there cannot be a building taller than the spire of the Koutaubia Mosque. So unlike Casablanca, there are no high rise apartments. 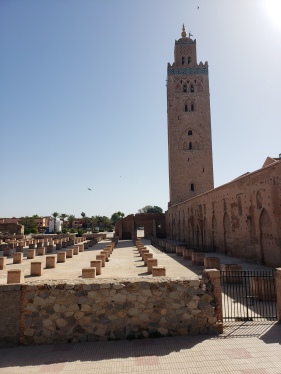 Original foundation of the mosque next to the current building

Our first stop was the Koutaubia Mosque, where we stood with reams of people pouring from tour buses to sit in the baking sun. We walked around to the front of the mosque, looking at the vendor art before deciding to move onward.

There was one vendor that caught my attention, which then brought about my mom’s attention. The man had painted on a small animal hide, then stretched the hide in a frame, creating an open frame concept around amazing artistry. I chose to move on, though my mom contemplated a purchase.

She passed it up, though I have a feeling we will be back.

The next stop was the Saadian Tombs. Another example of beautiful handcrafted Moroccan artisan work with plaster and wood, the tombs were buried for 400 years in the middle of Marrakech. It wasn’t until the early 20th Century when a pilot saw the tombs from the air that the city realized an amazing historical artifact was sitting right in front of them under a pile of sand.

Apparently, a king didn’t like his people traveling to Marrakech to pay homage. It wasn’t about who was in the tombs; it was about his people should stay home and pay homage to him only. So the tombs were buried, and now people stand for hours in queue to lean in at the edge and see the beautiful interior.

Of course, Vivian was more interested in the turtle who was minding its own business, trying to avoid the sun.

Main chamber of the Saadian Tombs

After the tombs, we walked through the souks (markets) on our way back to our riad. Unlike the medina in Fez, Marrakech’s medina and souks have slightly wider avenues, providing better landmarks for us to find our way. As we walked back to our riad, my mom and I were taking note of the landmarks that will help us navigate the next two days.

The largest difference in Marrakech compared to where we’ve been so far is the number of tourists. Chefchaouen was crowded with tourists, but tour buses couldn’t reach the small medina and the riads were incapable of handling the traffic. So tourism was limited to smaller parties.

While we stayed in a hotel with larger tour groups in Fez, we were not as exposed to the huge tour groups as we moved around the medina, due to size and access. In fact, Arfoud was the first time I really felt completely surrounded by tourists, but it was only one resort and we stayed very little time.

As we made our way over the mountains, the number of tour buses on the road increased exponentially. All to arrive in Marrakech, apparently.

The souks were filled with tourists, donned in their summer attire of shorts and tank tops and naked midriffs, exposing their fleshy white skin. At one point, I randomly stated “I would not be comfortable,” to which our travel companion just stared at my burst of words.

I shook off her curiosity, explaining I have a tendency to blurt words mid-thought without any connection. Which is true, I admit.

The reality is I dress modestly in my every day life because genetics have gifted me with pale ginger tendencies that do not respond to sun other than to burn, and I don’t feel that anyone should be subjected to the blindness inducing organ that is my skin. However, before coming to Morocco I researched the country’s standards of dress so I wouldn’t be too offensive, despite my lack of head covering, shorter sleeves, and American accent.

After nearly two full weeks in more conservative areas, I was overwhelmed by how the tourists were dressed. 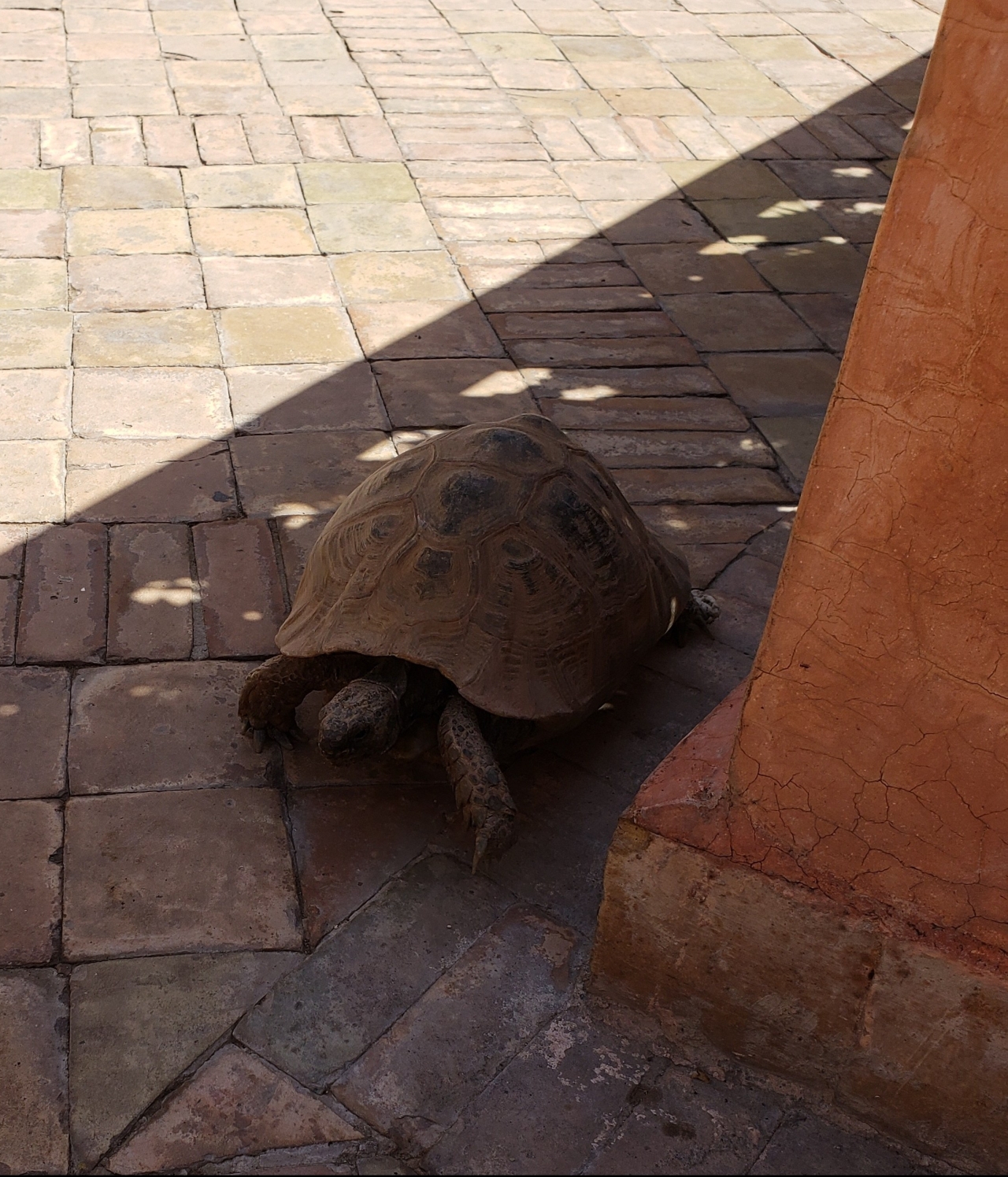 Dinner involved a restaurant across from the Koutaubia Mosque, where I was assigned responsibility for handling the language barrier between our server and the rest of our travel party. The server had a horrible evening as I watched all his tables fill in the space of five minutes, after which he was subjected to an American and Australian yelling for not understanding their drink order. A drink that was not on the menu, no less.

I am a firm believer that a smile and a thank you goes a long way in this life in helping overcome barriers. This vacation has affirmed that belief.

Despite the confusion and chaos, I felt comfortable and in my element. So much so we navigated through the night performers in the square and into the medina despite most of our landmarks disappearing with the setting sun.

Tomorrow we will visit the Majorelle Gardens where there is a berber and Yves St. Laurent museum (odd combination, if you ask me) and will spend our afternoon on our own in the market. I’m finally wandering and absorbing, though I feel Vivian might be holding on by a thread.