I turn the collection of memories in my mind, a large tile with color and nuance, texture and depth. My brain decides it’s too large to fit the mosaic that has tiles added every day.

So it starts chipping away, like the workers in Fez, shaping the tile into a smaller piece that will have it’s place in the overall experience. Wait, no! I want that memory!

My brain doesn’t listen, chipping and shaping in a predesignated pattern only it understands as I struggle to hold onto pieces turning to dust.

No, please don’t take that part, I loved that part.

I’m on my knees, tile shards slipping through my fingers as I try holding onto the full picture of smiles and laughs, comments and impressions. With tears in my eyes, I look up at the mosaic in front of me and see only bits and pieces left.

A quirk of a smile and lift of an eyebrow. A giggle of enjoyment at a loose tooth. A patient wrist stirring chocolate into milk. Sunlight warming my face. The burn of tears as I face my mom’s health. Deep eyes sad with goodbye. Regret and loss.

Fez has a small place in the overall mosaic in my mind, pushed aside by the overwhelming amount of information that has been added since then.

My heart hurts. This is not fair.

I mourn the tiny pieces I am allowed, especially since my heart has left a large chunk of it in the old city filled with tradition and history.

Today we left the oasis in the middle of Skoura, heading towards Marrakech. The last few days have been the hardest on all of us, as we have moved every night, journeyed through the desert – on a camel with no name – and found a small respite within an oasis of familiarity and comfort.

The changes every night have been particularly trying for Vivian, and this morning she had a hard time leaving the one place she felt was designed for her. Bad enough I made her leave the desert yesterday, but today she had to leave a playhouse and playground as well. 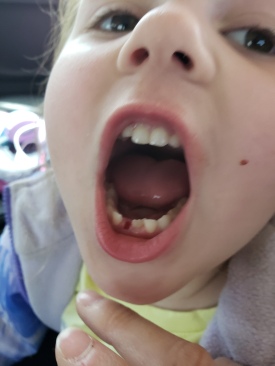 Even the excitement of a loose tooth is gone, as the tooth came out with an apple bite yesterday as we journeyed from Todgha Gorges to Skoura.

Today we started our tour in Ouarzazate, the cinema capital of Morocco. Movies such as Lawrence of Arabia and The Gladiator were filmed there, and we spent a few minutes walking through the movie sets.

Though movie sets in general don’t interest me, since they are fake, Vivian had a breakdown and needed some focused time. So she and I played hide and seek, tag, and a few other games that wouldn’t interfere with the environment.

Mom and our travel companion cared very little for spending much time at the movie sets, so we were leaving about the time the larger tour buses full of people started showing up.

Then we began our ascent up into the High Atlas Mountains. The road was narrow with switch backs and questionable drivers. Our driver navigated the stress of a lot of drivers with very little road as we moved towards the tallest point in Morocco.

We stopped for lunch at the summit, where Vivian had cheese pizza once again. Our driver communicated my mom’s eating situation, so we were able to get a smaller tailored lunch for her, as well. Unlike my travel companions, I have developed a particular taste for some traditional Moroccan cuisine, such as Couscous aux legumes (vegetable couscous) and the variety of ways they cook eggplant.

Unfortunately, the tangine cooked meal was only available if you called ahead, so I ate cheese pizza with Vivian.

Then we began our descent towards Marrakech with road construction added to the mass amounts of traffic and a tiny road. In an attempt to straighten and widen the road, they are digging out parts of the mountains. Unlike the States where mountain roadwork tends to occur in five mile increments, Morocco is working on the entire northern side of the mountains at one time.

According to our driver, they’ve been working on it for 6 years and there is only one stretch of about half a mile that is finished.

Once we reached the foothills, it was an uninteresting and flat drive into the Marrakech. We knew we had reached the city when we started seeing golf courses and pink hotels. Our driver informed us that the city itself has over 50 golf courses with each resort having their own, plus the royal golf course that is a public course.

The reason it is named the Royal Golf Course is because the previous king was an adamant golfer, not as I assumed that it was reserved for those who are of the royal entourage.

Since I’m more comfortable with our driver by this point, I started asking more questions about the monarchy. Finally, he said “Michelle, I cannot answer these questions.” This is not the first time he’s ignored or sidestepped a question I’ve asked, which doesn’t offend me.

After all, I’m pretty sure I’m still violating norms and certain ways things are handled here without realizing it. However, I have gained more grasp of saying hello and thank you in Arabic, as well as how to navigate without too many overt issues.

As we moved further into the city, I could sense how Marrakech is unlike anywhere else we’ve been so far. First, there are far more tourists and tour buses here, and the tourists do very little to adapt how they dress or act. Second, the entire vibe is an urban, bustling modern city vibe.

While my sentimentality seems to be solidly in Fez, I can see Marrakech will be where I can come into my own as far as comfort and self direction.

In fact, other than our guided tour tomorrow, our plan is to forgo the additional six hours of driving to the seaport of Essaouira and focus on meandering the souks (markets). Our travel companion has wanted to wander and shop for almost the entire trip, and it appears in Marrakech we will be allowed the freedom to move at will.

And if we aren’t allowed, I will take it. Tonight I googled a map of the old city and where we are located, and I’ve been marking landmarks since our walk into the medina. At this point, I will pop any bubble so I can get some wandering in.