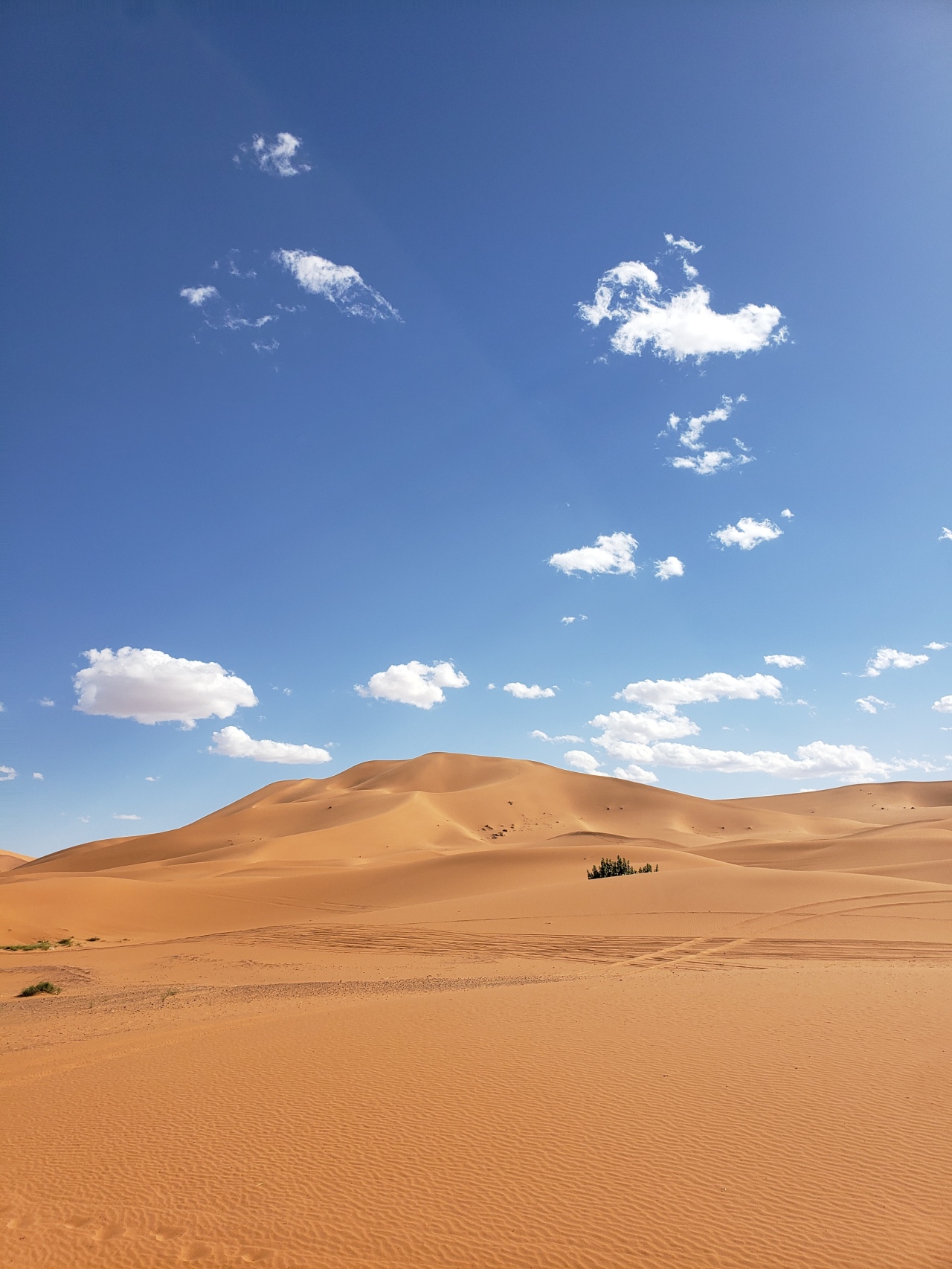 “You don’t want to go to one of those places without a guide,” our driver says when I ask why we need a guide for the market.

“Why not?” I challenge, not impertinent but impatient to immerse a little more than we have.

“For one, don’t you want to know the history of the kasbah that is there, and maybe about what you see?” he asks as he looks at each one of us while we thoughtfully chew our lunch.

“Plus, you will be hassled,” he adds, taking a bite.

“Hassling does not bother me,” I say like a child pushing curfew.

“You will not like this hassling, Michelle,” he looks at me with the smile of a tolerant parent.

I give in for now. But I will have my time of wandering outside the bubble.

Today we left our resort of one night in Arfoud to journey to the Ksar Rissani to see an old trader’s kasbah, a shrine to the first king of the current dynasty, and stop at a small market that is held on Tuesdays, Thursdays, and Sundays.

Ksar that is still residence for spice traders from the desert

I have learned the use of kasbah is often incorrect, as a kasbah refers to a single dwelling within a medina or city. What most people refer to as kasbahs are called ksars, or a village fortress. I can barely remember how to pronounce thank you in Arabic, so I am sure I will forget this, also.

While the facts and dates from our guide swirled around my head, I focused on the difference in dress and people here compared to Fez and Chefchaouen. While most people in the village are Berber, there are a scattering of Arabic as well as a few from deeper within the desert and Africa. The clothing was more representative of the desert, though the traditional djellaba is found everywhere.

The market consisted of the same items we found in Fez, though of different quantities. According to our guide, the fresh fruit is brought from other regions as this region only grows root vegetables and dates. At the butcher we saw camel legs for sale, along with fish. The guide reminded us how far away we are from the ocean, so the fish is not the freshest compared to Chefchaouen or Casablanca.

Today I learned how to tie a turban, and I almost walked out with a purchase. Vivian had a head scarf tied, though when she saw herself in the mirror and couldn’t see her face, she cried. Our travel companion thinks Vivian scared herself when she looked in the mirror.

I think Vivian is still struggling with culture shock. The constant touching and attention is wearing on her, especially considering she likes to observe before choosing how she engages.

Our travel companion came alive in the market, while my mom seemed to wilt and lack her normal attention and interest. Although all three of us paid attention when the guide talked about the healing properties of camel’s milk.

Apparently camel’s milk is good for cancers of the digestive system.

After the market, Vivian had her first pizza in Morocco, which was also one of the first full meals she’s eaten here. While not a picky eater, Vivian is becoming resistant to eating when we sit down for food. Today she ate everything. Including some candied pastry our travel companion picked up in the market.

I had a moment of concern regarding her getting sick, but I will deal with that if it comes. After all, I let her take a piece of candy from a vendor in the Fez medina, and her system handled it. Apparently, it’s the three adults who are falling apart.

A rocky non-road to the sand dunes of Merzouga

We returned to Arfoud to wait for our 4×4 driver who would take us to our camel transports and Merzouga. Expecting only a 30 minute ride, we were informed the camel ride would take about 90 – 120 minutes. No going back; we all agreed.

The camel ride was a unique experience, especially since I’m used to having stirrups when riding an animal. I’ve decided they are much better left in romantic imagination, as our backsides began to feel every hard bump in our grass saddles. As our travel companion blithely stated, “someone put a pea in my saddle.”

I did not think of fairy tales, but I did have a familiar song running through my head non-stop after about 45 minutes of seeing sand blow towards me. … been through the desert on a horse, wait no, camel with no name… I almost regretted not buying cloth for a turban.

Our camel did have a name, and it was clear the affection the animals had for our handler. 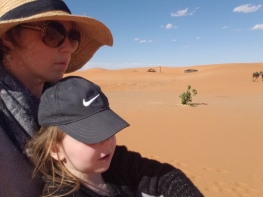 Been through the desert – with a 4 year-old

While our travel companion moaned and started asking about our ETA, I absorbed the absolute soul deep peacefulness of the desert. There is no other way for me to describe it. Silence away from electronics is nothing new, and I have experienced silence on different levels in various places. But what I felt in the desert was a stillness that I haven’t felt elsewhere. Stillness at the atomic level.

So still I didn’t even mind the grumbling as our journey neared it’s end. Once we reached the camp, our companion was hobbling toward the host and her tent as fast as her legs could carry her.

While my travel sickness resolved itself in Fez, it appears her constant companion this trip is digestive issues. 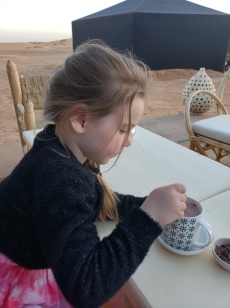 Hot chocolate in a Berber camp

What I did find interesting is our camel wrangler had a cell phone, even out towards our Berber replica campsite. Apparently, cell phones have really connected the entire world. There wasn’t any wifi, though that didn’t stop me from initially sitting down to write. Until I thought, wait I’m in the Sahara desert, why am I on my computer?

However, the campsite was hardly the camping in the wilderness I experienced as a child. We had electricity, showers, and flushing toilets.

Part one of two things Vivian was excited for is finished, and more than half our trip is complete. Despite not leaving supper until 10 p.m. and being exhausted this entire trip, I will set the alarm to watch the sunrise. I just hope the Berber camp has strong coffee.