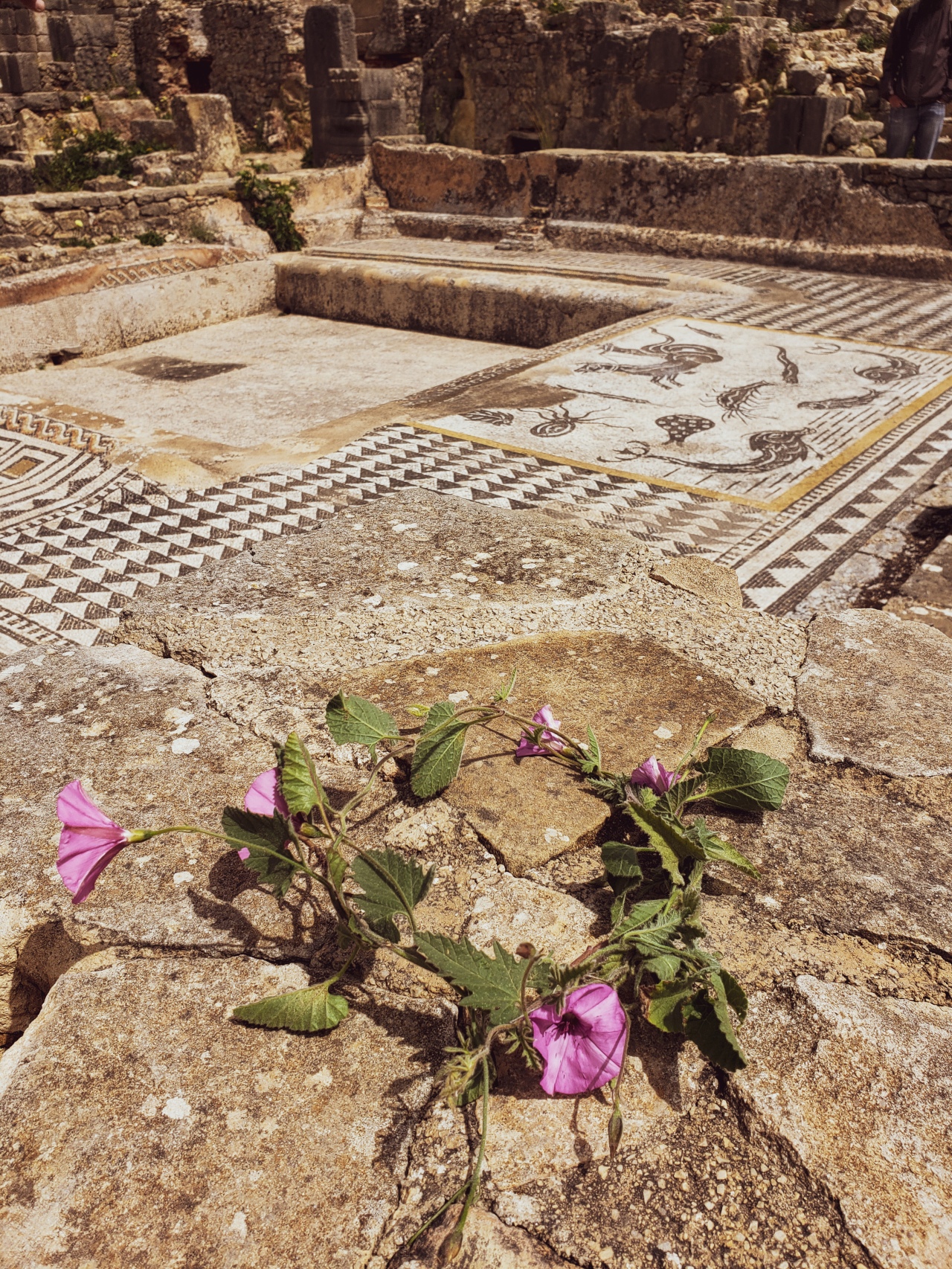 Most of us are not aware of our cultural indoctrination until we force ourselves into isolation away from our comfort zone. This also applies to our patterns of living and existing.

As far as travel companions go, my mom is probably the least inclined to create conflict since she has traveled on her own in  large groups, often making long term friendships with people she chats up along the way.

Unfortunately, she has not been super chatty this trip due to not feeling 100 percent.

Since I have Vivian and am the person who found the tour company and took initiative on this trip, I am the one who carries the most guilt. Entirely on my own shoulders, created by my own nature.

The other two travel companions are both the youngest and oldest, with 70 years separating their life experiences. Today our long drive from Chefchaouen through Volubilis to Fez exhibited some of our inherent personality traits as well as our awareness to our environment.

Although each of us was emailed the itinerary in both detailed and broad strokes, not all of us read it in the same detail. I did not memorize our path, but I’m carrying it in my laptop bag for reference just in case. Also, I have a general sense that most of our road travels are not direct routes but have stops along the way.

So, did I know we planned on stopping at Volubilis to tour the Roman ruins? No, but I enjoyed and went along with it.

Our travel companion did read the itinerary in great detail, but she seemed to forget we were touring the ruins. Unfortunately, she grumbled a lot during the tour, often asking the tour guide if he intended to walk the whole way around. As she said, she’s seen a lot of Roman ruins in her lifetime. Plus,  tours are difficult for her as she struggles with the accents of our native guides.

At one point she sat down on a wall and we continued walking, picking her up about ten minutes later as we walked by again.

My mom was not feeling well due to driving out of the mountains, so she was struggling to be engaged in her usual manner, which involves notebooks and notes writing down main key points from the tour.

Which left me and Vivian. The guide made Vivian a crown of flowers, which she took off immediately after he put it on her head. Of course, as soon as she became used to the idea and comfortable with him, she started pointing out every blooming weed as a hint for inclusion in her princess crown.

The Romans knew how to pick a site, as Volubilis is situated at the top of a hill overlooking a fertile valley where they could plant and harvest olives for Rome. After all, Rome was interested in harvesting the resources from Northern Morocco and cared very little for anything else about the countryside.

As we walked, we looked at the various mosaic tiles and what they tell archaeologists about the house’s owner and the society in Volubilis. Currently, 58 percent of the ruins are unexcavated. Also, there was a large earthquake that disturbed the ruins, offsetting Caligula’s gate.

One thing I have become sensitive to is the word American. In our traveling to date, we have met and had casual conversations with a lot of different tourists. However, almost all are either European or Australian. We have not met another group of Americans.

So my awareness to the word is heightened, knowing the conversation refers to us.

I’m not so unrealistic to assume I can travel the world and immerse myself, blending seamlessly into whatever culture I’m in. The reasons I was so interested in coming to Morocco is because I would be exposed to so many different environments that are unlike anything I’ve experienced or would have opportunity to experience again.

Yet intellectual intents rarely align with initial reality. Part of the pressure on my psyche is I see and am aware of multiple layers of things occurring around us. Our travel companion does not care how other cultures perceive her, partly due to generation and partly due to her age.

Also, she has done a far amount of traveling, setting up dental clinics in Africa and South America with her husband.

My mother has always traveled in large groups, and I doubt her health allows her much awareness right now. Plus, my mother has always been more extroverted and engages with her environment on her terms in her perception, which is strongly rooted in conservative America.

While I do not understand the words between our driver and the guide, I understand the comments he made that I was not supposed to see. Just as I know our driver receives kick backs as he moves us through the country, calling his friends and maneuvering us for his benefit. This doesn’t bother me, as it is no different than any other culture in the world, including America.

I won’t even say I have much culture shock at this point, though I feel like I am violating norms without realizing it.

The part I struggle with the most is having a spotlight on me. I live my life in the background, watching and observing others while going unnoticed myself. I interact on a one on one basis with few individuals at a time, and for the most part am content to observe humanity from the audience. Easily done when I blend into the surrounding culture.

Now I am “American,” traveling with a 4 year-old and two elderly women. Unwanted attention was inevitable. 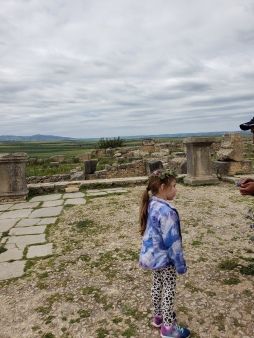 After our short and what felt like failed “touring” of the ruins, we were on the road to Fez where we will be for three nights. I was sad to leave Chefchaouen, and I’m a bit doubtful this journey will be as seamless and effortless as I once thought, but I’m hopeful about what the rest of the trip will present.

With time and exposure, I will find my own comfort zone within this country and within this travel group of four very different people and a driver, who adds his own complexities to the potion.

For now, I will allow myself to absorb what I see and hear, playing audience despite being on display.