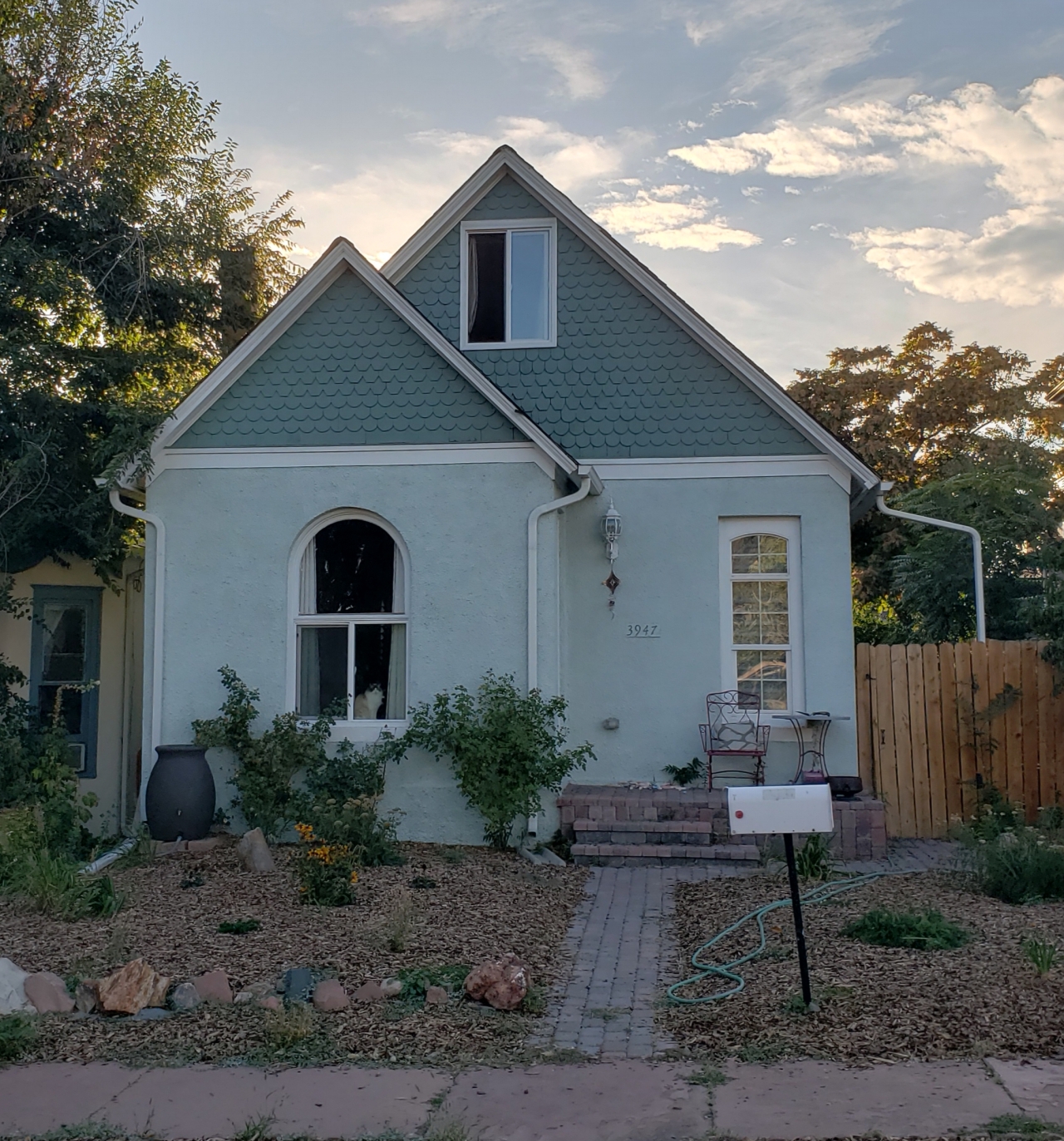 “Hey, what can I help you with?” The foreman removes his ear buds and looks at me from his sitting position on the dusty root cellar floor.

I move further down the steep, uneven cement stairs as I look at two of the three workers I can see. The foreman stares at me, like I was interrupting their flow. I understand, clients don’t interact much and get in the way when they do.

“So, I’m taking my daughter to dance class. I was wondering when you guys will be finished.”

I edge myself to sitting on the stairs, barely fitting and aware a slight lean forward would tumble me to where the foreman is crouching. The second worker has his back to the crawl space that extends under 2/3 of the house, looking straight across the basement towards me, and finally I can see the third worker standing by a joist support that isn’t attached to the floor. Inside I shudder at all the times my daughter has bounced across the floor upstairs, unsupported.

“Oh, yeah, we are just waiting on Jose, slow on filling up his buckets,” the foreman and middle worker laugh as they look towards Jose.

I look at the dozen and a half filled buckets, dirt and concrete the three have been hauling up for most of the day. My eyes travel across the expanse of what could be called my basement, for a lack of a better term. No, there is a better term. More like root cellar with a thin sheet of poorly laid concrete, overhead joists cut by unnumbered, poorly done infrastructure remodels and heavily burdened with HVAC and plumbing. Slowly I take in the 2 x 2 holes pockmarking the floor. In another day the holes will be filled in with rock composite, designed to disperse weight of two floors bearing down on 3 steel beams and 9 jacks.

“Well, we are better off than I thought we would be, ahead of schedule, so we shouldn’t be here on Thursday but for some clean up or concrete checks,” the foreman begins talking his end of day dispatch talk. I catch every other word, distracted by sounds of my daughter while also mesmerized by what has become of the uneven floors. “So, I don’t think we have much more to do.”

“You guys can stay as long as you want. Just saying I won’t be here with you,” I smile.

“Yeah, well, we are in a good stopping point and probably need to get checked into our hotel, if you don’t mind us leaving the buckets like this.”

“I was wondering if you would drive back down to Monument tonight,” I comment lightly.

Although there are structural companies and firms by the dozens in Denver, this company is from a town that is on the southern edge of halfway between Denver and Colorado Springs, the two main urban areas of Colorado. I don’t know much about Monument other than it’s a bit of a hill sitting on I-25, away from the mountains, so snow storms pick up speed and slam the small town.

Why did I pick a company so far away? Of all the PMs that came to bid work, this one felt the most genuine, honest, and forthright about all my concerns. Choosing a contractor by intuition? Yes, that’s what I do. Plus, they were all about the same price, and this one could do it without me having to play contractor and hire additional companies to move HVAC and plumbing.

“Oh, yeah, well we were actually going to put up cots here if ya didn’t mind,” jokes the second worker, his full beard still well formed after a day of hard labor.

“Sure, you can stay here. But in full disclosure I gotta tell you I’ve smudged this house three times in two years, and there is still stuff going on,” I meet the eyes of the second worker, expressionless.

For one heartbeat there is silence. Confused, the foreman tilts his head as he searches my deadpan face. The second worker, his shirt rolled up to show sleeves of black and grey skulls, tribals, and Americana, stares in my eyes frozen. Jose nervously jokes, “that would explain the shadows,” breaking the spell.

The foreman jerks towards Jose, and the second worker laughs. I laugh and say, “seriously, guys, I was kinda hoping you hauling out dirt would take care of some of this. After all, this has got to be the creepiest basement and crawl space I’ve ever experienced.”

All three voices chime in a harmony of believing disbelief, as the second worker moves quickly towards Jose. Jose laughs, “damn, man, you’ve had your back to that crawl space most the day. You thought you felt sumthin, maybe you did.” The second worker shakes himself as he sits on a bucket of dirt.

The foreman looks at me, asking,” have you really experienced things?”

“Yeah, I have. Voices and things, mostly at the beginning.”

The truth is this house called to me, before I could even sense it. In fact, the reason we found this house was because I was being driven mad by our last house. In all rational sense, we shouldn’t have bought the house we were living in. We made it six months before deciding to sell. Denver was still in a crazy real estate frenzy, so we decided if we wanted to get away from our poor housing decision with a little bit of money, we needed to move soon.

Our real estate agent,  unlike the previous one, is a very smart man. I gave him some of my requirements, and he took me to different areas to test what I said. All in all, he knew I was a neighborhood buyer and not a house buyer. What does that mean? Houses are houses, and I can live in whatever. As long as I’m not going mad. But a neighborhood is beyond everything else. For me, the full environment needs to feel right, otherwise the house will never become my home. Plus, houses I like are found in neighborhoods I like.

After seeing a few houses, and losing a bidding war on a house not far from here, we were getting a little frustrated. Day by day my sanity was wearing away. Until I received a call to meet our agent at a house under renovation. The minute I stepped from the car, I heard the crows cawing and felt this was our home.

At the time the house was ripped to studs, lath and plaster torn to shreds and thrown into the crawl space below the floorboards. It didn’t matter. This was my home. The potential I saw. The feeling I sensed. This was my dream home.

Though it really wasn’t. My preferred house is a Craftsman bungalow, complete with full brick porches, pane and stain windows, and solid wood bookcases around coal fireplaces. Second to a bungalow is a beautiful Queen Anne Victorian, complete with bay windows, crown and dentil molding, and a solid keystone above every window. Third is a hardy American four-square, complete with wrap around porch, butler’s pantry, and solid wood trim everywhere. So this house, a simple four room folk Victorian with a 1920’s kitchen and bathroom addition, wasn’t even in the running of my dream homes.

That didn’t matter. The crows called. The walls spoke. This was my house, despite my rational senses stating I saw the potential in the blueprints and I could pick my own colors and I could choose the octagon marble floor and subway tile in the bathroom and I could dictate gray cabinets with open shelves true to Victorian kitchens. This was my house bare boned and empty.

My house per contract at the end of June. A house we didn’t move into until the end of September. We bought the seller’s reasoning that contractors were hard to find, though come to find out that wasn’t the full story. We bought the surface because it seemed reasonable. After all, two years later and Denver still has more cranes in downtown than the four-state area combined. We played understanding because we had no choice. Our house had sold while we were in Panama, a single buyer offering more than asking, and rent back was not an option. Finding another house was not an option. After all, it was a seller’s market. And this house was my house, the decision was out of my hands.

So we figured it out, living in a loft downtown where energy bombarded me 24/7. We took deep breaths, feigned patience, and ultimately moved in before the house was finished. We reasoned the chaos of the workers was less than the chaos of loft living, and at least we were home. Though that first night made me question if moving here was right. Or maybe this house wasn’t mine, after all.

One thought on “Communal Living (Part I)”