“I mean, I’m not comfortable doing the surgery. I don’t have the skills to do it. And the only doctor here that I would trust to do it and has the skills to do it says it’s not a good idea, he doesn’t like the idea of it. But if there is a doctor who could do it, they would be in the university system. We could transfer you and they could try the surgery, but it wouldn’t be in network and, I don’t know, but if anyone could put this stent in, it would be them…”

The surgeon is rambling, repeating himself as he talks about the option of putting a stent in next to the tumor, allowing the liver and gallbladder to drain. My eyes go back and forth between Mom’s oncology surgeon, silently standing at the end of the bed while the GI surgeon talks, and Mom’s face. I see her eyes, and I recognize the irrational hope of a miracle that is building in her heart. I’ve seen that look many times over the past few months.

Suddenly I cannot stay quiet anymore. The frenetic energy created in my chest by the GI surgeon’s rambling explodes, and I stand up.

The surgeon stops talking, and three sets of eyes stare at me in the silence.

“You said the stent won’t fit in the space, and there isn’t enough tissue for the stent to hold anyway, right?” The surgeon nods. “You said Dr. Raju, a surgeon who has operated on Mom before, already said he doesn’t like the idea of the surgery, right?” I continue in a rush, “but now you say that if we are willing to experiment with Mom’s life there is a chance someone might be able to do it somewhere else, as long as we transfer her to another hospital full of doctors we don’t know, and what is the chance of success?”

I turn to the oncology surgeon, a man who has been honest and supportive since we met him at the beginning of May, “and the chances of risks and complications?”

“With your mom’s surgery history and her body’s current health, there is a very high chance of complications,” he replies.

I turn to the new surgeon. “My mom is not an experiment. She is not a test subject for a surgeon to try his skills just to see if he can do it…”

“Stop. I sat here and listened to everything you said. You both just confirmed what I thought I heard. And yet you keep talking,” I cannot stop the words, months of frustration boiling over in my heart and pouring into the room.

“I have one question,” my mom interrupts quietly, looking directly at her oncology surgeon, “will this surgery help me live longer?”

Her doctor sighs while the other surgeon looks at the floor, “no, Lynn. Like the palliative and IR doctor said yesterday, any measure right now is for comfort only. There is nothing that will extend your life.”

All energy drains from my body and I sit down in the chair next to my mom, my shoulders hunched and my hand grasping at Mom’s swollen and yellow hand as I ask, “but it means weeks of recovery and possibly complications from surgery that could end her life?”

“Does she have weeks?”

I know the answers to my questions, but the decision is not mine to make. I watch Mom fight for control: control of her body, control of time, and control of life, but I am helpless as she turns away from making this decision.

The first morning in Essaouira, Morocco, I felt the pressure of time pushing me forward into my day as I sat down to breakfast late, barely out of bed and unprepared. Though I was quick to adapt to Mediterranean time, my American upbringing of structured schedules conflicted with the natural flow I was trying to step into.

In fact, traveling for me is a balancing act between going with the flow and my inherent need for structure. While I do not enjoy planned tours and itineraries, preferring to find spaces and moments on my own, I like to research so I have one or two items to cross off my list when traveling. The loose structure gives me a sense of control while leaving enough freedom in my day for the winds of chance to direct my feet.

As we walked out the door of our riad, I knew what I wanted to accomplish in the day. Though my mom lived in Colorado for over 40 years of her life, she spent her formative years in Southern California. In contrast to my 100% mountain blood, my mom had a beach mentality that held strong to her personality. Since Essaouira is known for its crescent beach, offering soft sands and ideal winds for numerous water sports including surfing, I decided that’s where I needed to be.

Facing towards Essaouira from the port

Of course, traveling can take on a life of its own. Instead of walking from the medina to the beach, the winds of Essaouira pushed my feet to the northern edge of the kasbah to walk along the ramparts towards the port. The sun was warm on my face, and breezes from the Atlantic caressed my face as crashing waves and seagull cries created a soundtrack for my walk.

My body and senses were absorbed in my surroundings, but my mind was still trying to control the direction of my feet, focused on where my mom would have wanted to go. I noticed the birds fighting and swarming, the sun cresting the barrier that historically protected the small village from threats, but I was focused on my goal of taking Mom to the beach.

Until I reached the fish market at the end of the port, and my mind began to release its coveted beach idea.

The men had been awake since before dawn working for their income, and their daily

catches were on display for the residents and restaurants of Essaouira. Some were more prosperous than others, larger catches and more fish displayed on tables and in wooden stalls, while others had a small umbrella covering fish and ice laid out on tarps or a few fish on a tray. Though there was a variety of fish and shellfish, most looked similar until we reached a table with a baby shark on exhibit.

Once again, my American nature came into conflict with my immersive experience. Although the world at large eats shark, Americans are often against the act because of the endangered species off our shores and the inhumane act of finning. Yet standing in front of me was a man who every day worked in an environment he couldn’t command to earn an unreliable income. Despite all the things that were beyond his control, he managed to land this difficult creature with the hope to earn enough to feed his family.

An hour later the winds released me, and I came to rest at a shack consisting of ten tables and a grill. Although my American nature cringed a little, I agreed to try the shark. I was reared by my mom to try every food put in front of me at least once. Though it was her small attempt at fighting against a cultural norm of picky eaters, it was a lesson that became a keystone to my foodie tendencies.

Finally, my mind released its goals and agendas as I realized I was blown into daily life in Essauoira. Eating shark and shrimp and squid with my hands, I watched the animals and people around me dance on the air currents of their regular lives. I was a leaf deposited by a breeze, only a temporary visitor, but for a moment in time I filled my stomach and cleansed my soul with a simple and pure experience.

Eventually I made it to the beach, the winds of Essaouira taking me where I thought I wanted to be. And the beach was exactly as I expected, lined with hotels and filled with people sunbathing and enjoying the Atlantic Ocean. I pushed through a gale force exiting their tour bus before being deposited at a beach front restaurant, enjoying coffee and wine while watching foreigners and Moroccans alike walk along the sidewalk bordering the sandy beach.

The view was beautiful, and where I sat was peaceful with little air movement compared to the rocky edges along the kasbah. A beautiful resting place while the afternoon deepened and settled. 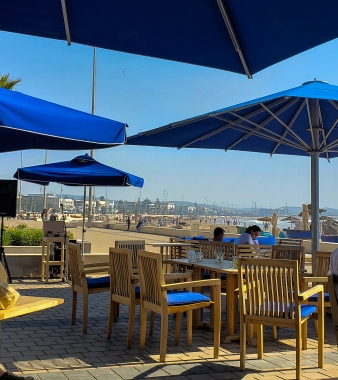 As I listened to the mixed dialects of English around me, I realized that if I had insisted on controlling my destiny and going directly to the beach, I would have missed out on the immersive element I crave while traveling.

Control is one aspect of human experience that I think we all battle with from the time we learn to walk away from our parents until our ultimate defeat in death. Whether we exert control over our lives in an aggressive manner, insisting things go our way no matter what storm buffets us, or whether control is asserted by building consistent routines designed as barriers against breezes and tempests alike, managing our lives against an inherent chaos is part of being human.

Traveling often exposes who we are as we attempt to battle against being out of culture, out of routine, and often out of language. The travel industry has built a successful model of shuffling people through foreign places in order to consume unique cultures while offering a sense of safety and control over an otherwise chaotic experience.

My mom liked to know what to expect, despite embracing all that life offered her in every opportunity. I think that’s one of the reasons she enjoyed traveling with tour groups. The itinerary was provided, the meals were consistent, and a bubble of familiarity forms when traveling with the same people for several weeks, giving Mom control while removing the necessity of decision making.

Yet it is when we give up control and focus on the decisions right in front of us, like eating a fish, that we can begin appreciating the time we are given. Even if the choice is between bad or worse, we can decide how we want to live in the face of an uncontrollable universe.

6 thoughts on “The Two of Us: The Port of Essaouira”